Bullying has been a fact of life in schools for centuries. The devastating emotional scars can last for years, far into adulthood. Social awkwardness and anxiety can affect victims’ activities at work, their friendships, relationships, and even their parenting once they’re old enough to have school-aged kids of their own.

Some targets may even wonder what happened to the kids that used to bully them years before. Are they succeeding in life better than their tormentors? Did their tormentors ever get what they deserve? Will they ever hear an apology for the mistreatment?

For one man, the experience of being bullied in school wasn’t relegated to the past forever. As an adult, Mark M. hadn’t forgotten what happened to him in middle school and was looking for some closure. He didn’t want to carry the painful feelings around any longer. Thanks to the internet, there was something he could do about it.

Fifteen years after they went to school together, Mark had identified his past tormentor on Facebook and began very loosely following him online. He got a sense of what his life was like and what kind of character he maintained as an adult. Eventually, he got up his nerve to reach out to him so he could try to connect about why things went as they did. He shared his experience on his Reddit feed and the exchange inspired tons of followers.

Here’s How Their Conversation Went

Mark shared that while he wanted answers he also wanted to do things the right way. According to a statement on his feed, he says that one morning, after coffee, he messaged his past tormentor. 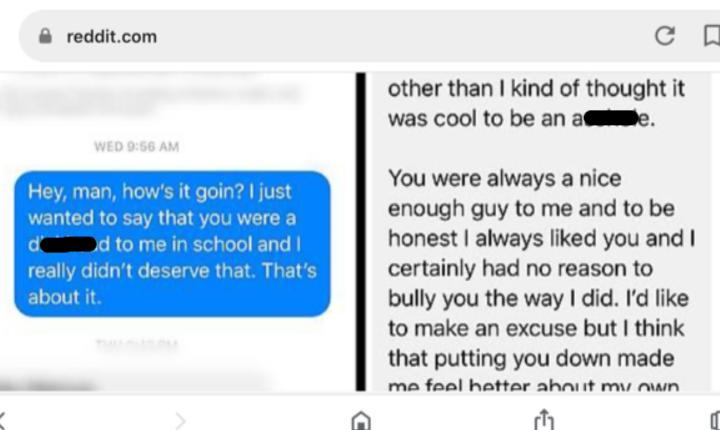 While he almost instantly regretted it, he was just as surprised by the response he got. His bully said, “I’m sorry my immaturity had such a negative effect on you. You’re absolutely right. I was a d*ckhead to you in school for no reason other than I kind of thought it was cool to be an a**hole.”

It is hard to imagine what it must have felt like to be on the receiving end of this kind of message. It must have been self-affirming and positive, bringing Mark the kind of closure that he’d been looking for during the decade and a half since it happened.

As wonderful as the first part of the message was, the apology got even deeper and more affirming. The past tormentor continued to apologize. He said, “I certainly had no reason to bully you like I did. I’d like to make an excuse but I think that putting you down made me feel better about my own insecurities. I truly hope you are well and happy and I apologize for anything I did to hurt you.”

When followers on Reddit and on the internet at large found out about Mark’s exchange, followers weighed in with lots of opinions and tons of support for Mark. Redditor Jaye128TV said “I’m proud of you. It must have taken a lot of courage to type that message.” Another Redditor, marceline_93 said “Wow! Well done!”

A third Redditor shared that he still had “flashbacks from when I was like 4 years old doing petty stuff to friends and family. I’m 19 and feel like a jerk.”  Mark actually continued his positive effect and gave the poster some great advice. He said, “You’ve obviously grown and changed since then. No need feeling guilty. Let it go.”

It is great to see not just the closure that Mark received but also how he passed on his positive experience to others. This is something that we need more of in the world.

Couple Didn’t Understand Why Their Photo Was Going Viral, Until They Read The Comments

Woman Marries Another When Her Groom Is Late