First responders see gruesome scenes all the time. But that doesn’t make it any easier to see a blood-soaked person behind the wheel of a wrecked car. So, when first responders arrived at the scene of a car accident and found Sidney Wolfe behind the wheel, covered in blood from hair to feet, they assumed the worst. So, they were completely surprised when Wolfe spoke to them, insisting that she was okay.

How could a woman who had clearly been in a bad car wreck, who was completely soaked in blood be okay? Was she in shock? Nope. As it turned out, the blood wasn’t even real! Wolfe was dressed as Carrie, the main character from the Stephen King book of the same name, who was famously covered in pig’s blood during her prom.

The Scene Of The Accident

If the accident had happened on Halloween, the first responders may have been quicker to understand that Wolfe was in costume. But the accident happened a few days before Halloween, so it took them a bit to figure out what was going on.

Wolfe said afterward that the first responders on the scene kept asking her if she needed medical attention. She had to explain over and over that she was fine and the blood was part of her costume. When a second round of police arrived on the scene, they were shocked to find police, firefighters, and EMT’s all casually chatting with a bloody accident victim. They demanded to know why no one was getting her medical attention. At least this time Wolfe had help from the first responders to explain the situation.

When you see the picture Wolfe tweeted of her wrecked car, it’s easy to understand why everyone was so concerned about her condition. The hood of her car was bent nearly in half, exposing the engine. 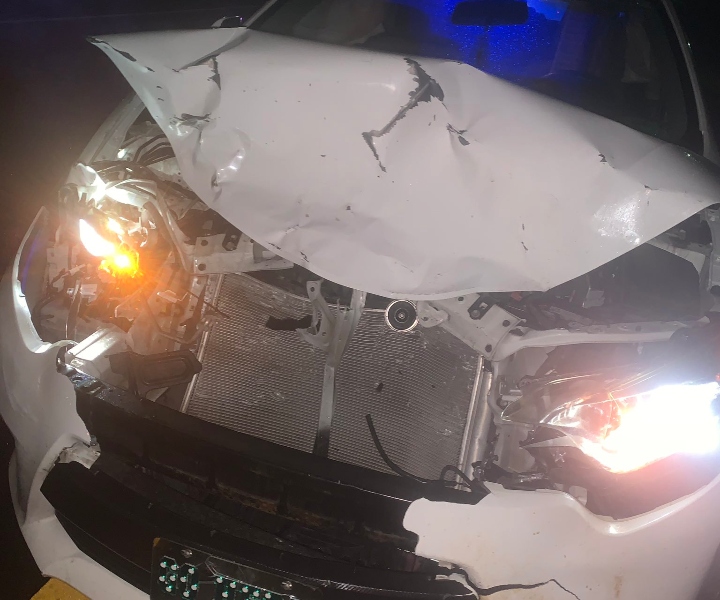 What kind of accident caused that much damage? Wolfe stated that as she was driving home around midnight, a large deer jumped in front of her car. She said it went all the way over the hood of her car. Hence, the massive damage. And hence, the massive concern about Wolfe’s well-being.

So, why was Wolfe covered in blood, dressed as Carrie when she wrecked her car? She was doing a promotion for a local production of Carrie: The Musical. Wolfe is in the production, but funny enough, not as Carrie. The woman who’s playing Carrie in the production was sick the night of the promotion. So, Wolfe, who’s actually playing Sue Snell, stepped in as Carrie.

As an advertisement for the show, cast members went in costume to local haunted houses the week before Halloween. When Wolfe was done at the haunted house, it didn’t even occur to her to remove her costume or makeup to drive home. She was driving home on back roads in rural Kentucky and assumed she wouldn’t run into anyone.

But then she ran into the deer. Or more accurately, it ran into her.

While first responders were cleaning up the scene, Wolfe snapped a picture of her wrecked car and a selfie of her as Carrie. She added these photos to a tweet:

The tweet quickly went viral. It now has almost 402,000 likes and over 75,000 retweets. As the tweet exploded, Wolfe started adding more explanation behind her accident. The story was quickly picked up by news outlets and became national news.

The Internet dubbed her Viral Carrie. How did Wolfe handle the sudden fame? She used it to promote her show, of course! Wolfe said that their production of Carrie: The Musical sold an incredible amount of tickets. And, of course, everyone wanted to stay after the show to get a selfie with Viral Carrie.

Wolfe joked that she was voted ‘Most Likely to be Famous’ in high school, but she didn’t expect it to come true by becoming a viral sensation.

Does Your Team’s NFL Stadium Rank Among The Best In The Nation?